While slurping up her tomato soup today, she decided that cheddar bunnies would be better than crackers. It’s Piper’s version of a grilled cheese, which she loathes: “It’s smashed bread and cheese! What’s the big deal?”

So the bunnies took a yummy dive and Piper said, “Mom, there is a pool party going on in my tummy. I’ve invited these cheddar bunnies. Hope they can swim!”

Piper requested pasta fagioli for dinner last night. Again. In the perfect Piper world, any kind of pasta with any kind of bean in any kind of broth would be served for breakfast, lunch, and dinner. Probably snacks, too. Here’s how I make mine:

Bring to a simmer 4 cups water, 1 can tomato paste (6 oz.), 1/4 cup olive oil, 2 tbsps dried basil, and a dash of red pepper flakes (Piper actually likes it spicy). Simmer for 30 minutes. Add 3 cans drained cannellini beans. Simmer another 30. Cook pasta (I use elbow or shells). Add salt and pepper to taste. You can also add chopped spinach or kale. Serve it all up topped with parmesan. Yum.

Last night Piper ate two heaping bowls. Then she begged for a third. Halfway through it, she ran to the couch, splayed herself on it, and announced “Just a minute! I’m digesting!”

Yesterday was moving day (more on that later). In a frantic rush to clean out both my fridge and pantry, I made soup. I chopped up every single vegetable (3 carrots, 1 onion, 4 parsnips, 3 stalks of celery, 1 yellow pepper, and a handful of snap peas) and threw in as many cans of kidney beans and chopped tomatoes as the pot would hold. The cookbooks were packed so I made it up as I went.

Piper wanted to help, so I let her sprinkle in cumin, chipotle, oregano, and basil. Turns out, I was making chili. I found a can of warm beer in the back of a closet so beer bread became a side dish for the chili. Piper stirred and sniffed and tasted. She added more pepper. She said it needed salt and honey. She asked if we could shred the rest of the cheddar block to top the bowls of chili. She’s brilliant like that.

And we ate chili and hunks of fresh beer bread slathered with the last pats of butter. The movers had taken our chairs and table so we sat on the empty dining room floor. It was the best soup I’ve ever tasted. Piper has the touch.

This morning we woke up in our new house in a maze of boxes. I found 3 bowls but we couldn’t find spoons. We have cereal but the milk is still at the other house. We drank our orange juice from crystal goblets. “What do you want for breakfast, Piper? I found bagels. Or you can have dried cereal without the milk. And I have one pear.”

So Piper had soup for breakfast. She wants it again for lunch. It’s becoming her thing. There are worst things. If it were up to Piper, there would always be soup for you.

After my rant about Piper’s numerous food complaints in “I Hate That,” it seems only fair to share how sweet she can be with food she loves.

Last night Piper dragged in a stack of books for me to read to her as I made dinner. I chopped carrots. I read a book. I chopped celery. She read the book back to me. I brought the broth to a boil and added spices. I read another book. I sauteed seitan and put on a pot for homemade noodles. I read another book. I washed asparagus and spinach. She doused it with olive oil. We put rosemary bread in the oven to warm. Then Piper help set the table and we tasted the soup together.

“You know what makes it taste so good, Mommy?”

“Love. You sweeten it all up.”

Ugh. Either Kathleen Turner is hiding in Piper’s bedroom or we’re headed down the sick path again. The raspy voice. The sweaty forehead. The cuddles from my normally bouncy girl.

One cup of orange spice with 1/4 cup apple juice, a tincture of echinacea, 2 tbsp honey, and 2 ice cubes coming up. With a straw.

Piper assesses how sore her throat is. “It feels like there’s a pretzel stuck in there.” As bad as that sounds it’s not as bad a the time she said she thought she’d swallowed glass. That was the dreaded strep throat. Double ugh.

I check her temperature. Again. I dole out ibuprofen. I wish for the hundredth time I had magic pills to give my kids when they’re sick. I wish I could go through it for them. Piper’s glassy eyes get glassier.

Of course, baby. I could use the reserves, too. Who knows how long this will last? I already miss the Piper a.k.a. my squirrel on crack.

Her dad takes her upstairs for a quick bath and brings her back down weepy and wrapped in a towel. “She says you do it better. She just wants you,” he reports.

I warm a bowl of noodle soup. I blow dry her hair while she slurps.

“I know what we need,” I say. “Cherry Garcia. STAT!” Piper nods and takes her medicine. 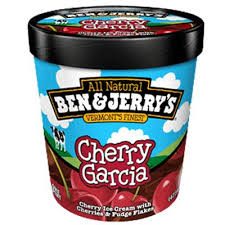