Maybe I should have seen it coming, but I’ve been in complete denial.

It’s more like a transition than a break up; hearts hurt just the same.

Sissy and Piper have slept together for years. They have their own rooms, but they’ve chosen to share the bunk beds in Piper’s room. Sissy has the top bunk. Piper burrows into a bottom nest below. Piper snores. Sissy has gotten used to it.

But over the last few weeks, Sissy has been sneaking out and going to her own room. It makes sense. She stays up much later. She likes to sleep in. She wants her space and privacy. Piper still springs out of bed with the sun. She likes to kick the top bunk and try to jostle her preteen Sissy awake so that she’ll play with her. Sissy is not as tolerant as she used to be.

Piper doesn’t quite understand the break up. The absence stings. Last night as I was tucking her in, Piper asked me to climb up into the top bunk. She just wanted someone up there while she dozed off. I found myself in a world of pink flowered pillows and stuffed animals. It’s a little girl’s world. Sissy isn’t much of a little girl anymore. My heart cracked a little, too. Then Piper called through the dark, “Okay, Mom. You can go now. I’m fine. Sissy’s just next door. I know where to find her.” 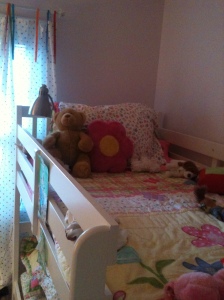 2 thoughts on “Break Up”