Our school has an annual Take Your Kid to Work Day, lovingly and ridiculously referred to as TYKTWD. We’re in D.C. We like acronyms for everything. It’s insider lingo.

I asked Sissy if she wanted to come with me. I imagined her adoration as she saw her mother in a different light. I pictured students stopping me as I crossed campus to profess their devotion to the ways I had transformed their writing through my teaching. I know. I know. Sissy mentioned something about a killer game of foursquare at recess that she didn’t want to miss. My dreams were crushed. Then little Piper piped up.

Off we went. First, on the train. 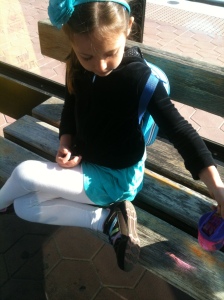 Where Piper read me all the rules. No eating. No standing in front of the doors. No loud music. No drinks. Then she spilled her water all over our Metro seat.

During my class, after my students fawned all over the Piper, she busied herself with her Career Shadow worksheet. 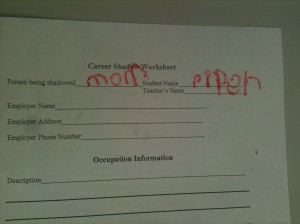 That’s as far as she got. “It looks like you just talk a lot. Is your job talking?”

Then she discovered a chocolate her Sissy had stuffed in her backpack as a surprise. Her chomping drowned out my talking. Until I started asking questions. Then, Piper’s hand shot up in the air with the rest of my students. She waved frantically. Then she noticed that college students don’t wave frantically. Much. I called on Piper. “I don’t know,” she said, “I wasn’t even listening to the question.”

The lesson continued. As my students brainstormed possible presentation ideas, I wrote them on the chalkboard. Then we began analyzing the argument and evidence for each. They talked, I wrote, we learned. Piper joined in. There was a chalkboard and chalk. She couldn’t help herself. Just as I was about to sit her back down so that she wouldn’t be a distraction, she wrote this.

Awwww. I’m not sure what Piper learned on TYKTWD but I know that she LOEVs MOM.