As you may have heard, unless you’re boycotting or hiding under a rock, last week was Valentine’s Day, which is really just another opportunity for Piper and Augie to engage in their ongoing soulmate love fest.  I vote yes for any occasion that let’s me just say I love you. I don’t need flowers although I won’t complain about them either. I definitely don’t want to brave a restaurant and/or wrestle someone for a babysitter on a Tuesday evening when much of the rest of the country is trying to do the same. But I’ll happily eavesdrop on your personal valentine messages and appreciate the truth about love.

The truth about a long distance friendship between four-year-olds is that it’s hard and it’s work.  You miss each other and you don’t know when you’ll be together again.  Your parents are entirely in charge of scheduling and they seem to be busy doing something called “work.”  You don’t have a credit card yet so you can’t just buy a plane ticket.  You don’t drive, even though you really, really want to, so you can’t just hop in a car. You don’t own a boombox so you can’t hold it above your head and blare “In Your Eyes” like John Cusack in “Say Anything”:

Oh, swoon.  That gets me every time.

As a four-year-old in love, you have to rely on Skype, video messages, and the postal service to keep the flame alive. So, you work hard to express yourself to your valentine with the only tools you have: markers, glitter, heart stickers, and foam beads. Here is what Augie sent Piper this week: 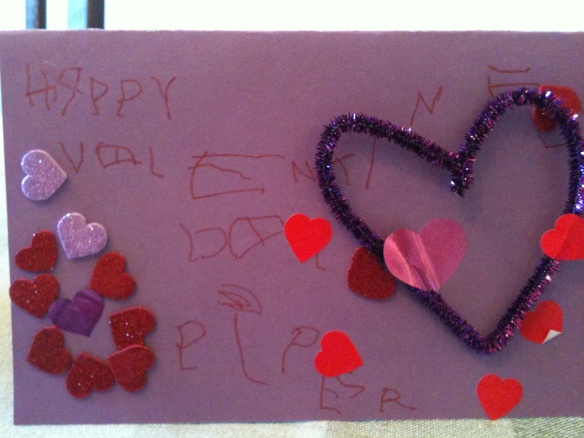 Swoon again.  That Augie is sweeter than candy.  That’s a lot of glitter hearts and you and I know clearly what that means.  Nothing says I love you like a purple pipe clean molded into a heart. And any man who understands the importance of dotting your “i” as a statement is a good man in my book.  Piper went a bit more of the clichéd route and relied on jewelry to express her feelings: 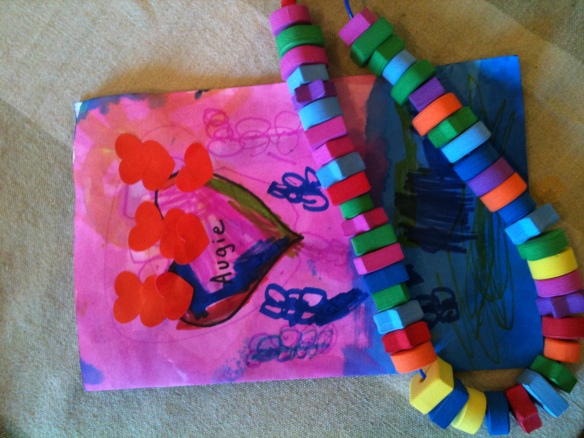 As a girl invested in anything rainbow, making and then giving away an awesome foam rainbow necklace is the ultimate sacrifice. And look at the layering of hearts.  Clearly, a metaphor. Let’s look inside:

Writing her name is not Piper’s favorite thing to do, but for Augie, she will.  Happily. Because when you love someone, you work at it.  You tell them. And you hold on tight.