If Piper was a super hero, she’d be known for her Pipeyness. Pipeyness is hard to define but it’s easy to detect. It’s a way of being, a powerful force.

“No way. Pipeyness is the best super power ever,” Sissy disagreed. Sissy is president and CEO of the Piper fan club. Most of the time.

Yesterday at Universal Studios Piper met all of her favorite superheroes. Spider-Man. X-Man. Wolverine. And the “tough girls,” too.

“See those Super Women, Mom? They’re so tough they don’t even need weapons!” 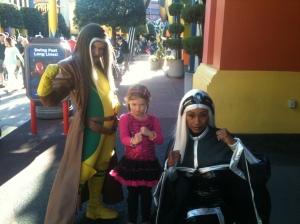