At breakfast we tell stories.  Piper told us a story this morning you might have heard of but might not recognize.

So first there was an earthquake and Dorothy ran to her prison cell.  She didn’t really feel the earthquake because she was asleep.  Her parents were blown away in the shaking.  Dorothy says, “Oh, Toto.  Isn’t this a wonderful place?” Then there were munchkins.  And there was a really nice lady who said, “Here are some magical glass slippers.  Just like Cinderella. The witch won’t like it but they’re yours, Dorothy.” Then the witch comes by and says, “Give me those.” Then this house falls on her.  Too bad.  Then they meet this Tin Man.  He’s frozen, but he sings anyway.  “We’re off to see the Wonderful Wizard of Oz.” Then they meet a lion and he growls a lot.  Dorothy isn’t scared, though.  She’s really brave because of her glass slippers.  She doesn’t even mind the blisters.  New shoes often give you blisters, you know? Oh, I forgot about the scarecrow.  He was there, too. So, there’s singing and dancing and skipping all the way to the witch’s house.  She has a crystal ball and says she’ll grant them three wishes. Dorothy and her friends took the wrong path, you see.  They probably should have used bread crumbs or something. This may be the Hello Kitty version. The witch said to her guards, “Get them!” Then Penelope, one of the bunnies, tried to turn them all into toads.  Dorothy and her friends ran and ran.  They found the right path and Dorothy got to go home, but before she did, she asked Oz what he wanted and he said, “No one’s ever asked me what I wanted!  I want to go home, too.” So he poofed them all and they went home.  There was a rainbow, of course. The end. 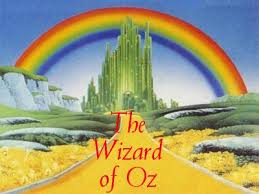 If you like Piper’s story mash up, you might also enjoy her musical mash up:  Lady Gaga is in the Kitchen.

2 thoughts on “Oz and Hello Kitty Mash Up”