When I grow up I want to be Mrs. Peterman. She is our 78 year old neighbor in Illinois. She mows her front lawn in her bathing suit, has a halo of picked out brown hair, and always wears full makeup. That’s not necessarily the part I aspire to, but it shows you her spunk.

Mrs. Peterman loves really hard. She breaks out in tears of joy every time she sees you. Then she talks your ear off. Some of it is neighborly gossip: who got new windows, who is or is not mowing enough, who had an unfamiliar car stay the night. She means well, though. And she’ll do anything for you, including flirt shamelessly with the guys from the power company to get your street reconnected first after a storm. Mrs. Peterman also bakes the best chocolate chip cookies in Jackson County. That is not an exaggeration. She wins most of the baking contests in the newspaper. If you’re lucky, she’ll make you her sour cream banana bread, too.

The real reason I want to be Mrs. Peterman when I grow up is her positive light. She smiles and laughs and loves. We stopped by yesterday to pay a surprise visit to our old neighbor. 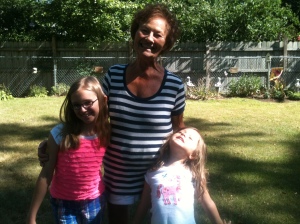 Mrs. Peterman told us that she’d taken a fall lately. She was on a shopping trip to St. Louis with some girlfriends. She has a lot of girlfriends and a packed social calendar. Anyway, one of her friends, who Mrs. Peterman says is “much older and in worse shape than me,” was leaning on her arm and Mrs. P took a tumble. She was bruised a bit, but she bounced back. When she went to the doctor he said, “Sue, I can tell you’re not a complainer. You’re strong, too” and she said, “Is there another way to be?” Piper gets a kick out of Mrs. P’s stories. I think they’re cut from the same spicy cloth. Mrs. Peterman was one of the first to tell me that Piper just needs to be a Piper. She’s a free spirit and she needs to express it, just like Mrs. P.

During our visit Mrs. Peterman said that the approach of 80 was making her a bit tired. She was entirely surprised by this development. She and Piper share a similar energy level. They look like two hummingbirds chattering and darting about the yard when they’re together. Mrs. P told us that she gets invited to a lot of parties. “They want me there because I bring the party. I am the party,” she said. That sounds just like Piper, doesn’t?

Mrs. Peterman also knows her mind. She has her priorities straight: God, family, friends, yard. Even in 100 degree heat, Mrs. P is painting benches, pruning bushes, and pampering her flowers. “You gotta live,” she said. “I’ll take my health more than all of their wealth.” And that’s why I want to be Mrs. Peterman when I grow up.