I’m well known in our family for saying my partner’s name a bit incessantly, perhaps even in a nasally whine. When Sissy was little she used to stand at the bottom of the steps imitating me by yelling up to her father “Joooooeeee!” We thought it was hilarious. You have to be able to laugh at yourself, especially when you’re being ridiculous.

I thought I’d gotten better. I’ve learned the soft start. I don’t nag nearly as much as I used to. I’ve let a lot of things go. See how evolved I am? Piper doesn’t see my progress, though.

“Yeah. But you and Alvin are always getting yelled at. Dave says ‘Allllviiiin!’ and Mom says ‘Jooooeeee!’ the same way.” 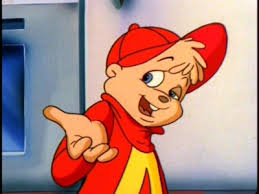 1 thought on “The Call of the Chipmunk”